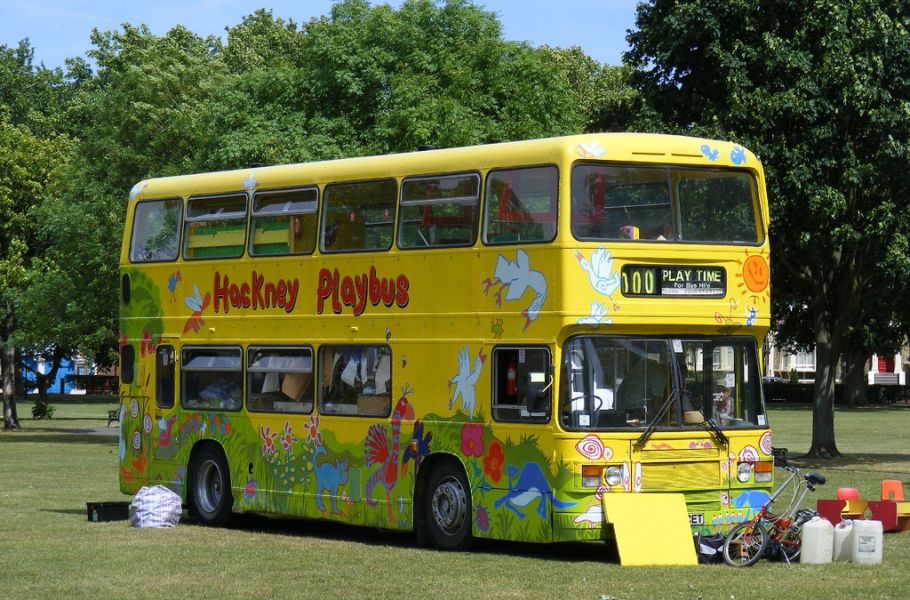 In 2012, I was invited to visit the Hackney Playbus, which was, at that time, celebrating its 40th birthday.

Hackney was one of the oldest Playbus projects and it was great to know it was still going. They have had several versions of the bus over the years, which is probably how they have managed to keep going so long. This also included a topless bus, but that was due to a bridge and definitely unintentional. 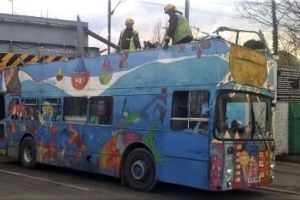 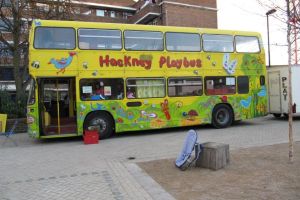 Like all Playbus projects it was certainly a ‘Wonderful-bus’ full of fun. With its bright and colourful exterior it certainly caught my eye and I just had to go inside and look.

Inside the bus upstairs and down

The lower deck was filled with areas for arts and craft with paint and sand ready.

Upstairs it was an area full of toys to play with, including a red bus toy. 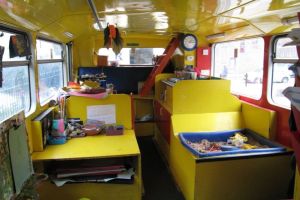 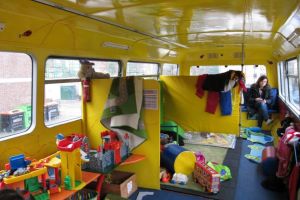 There was also a home corner and seating areas to read books. Lift the seats and you might find more toys stored inside.

The most popular spot on the bus was probably on the upper deck play area which had a child-centered cab complete with steering wheel. Here any child could not only play at being a bus driver but with a commanding view of the estate all around I’m sure this would be perfect for any child. And why not? 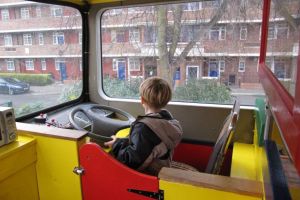 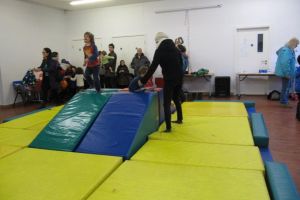 The 40th birthday party not only celebrated the bus but also the community links and the days events were also held in the nearby community center.

The project had close links with ‘Albion Kids show’ who had today brought along a trailer of soft play mats to fill the community center hall. 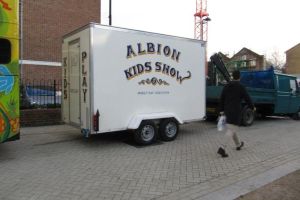 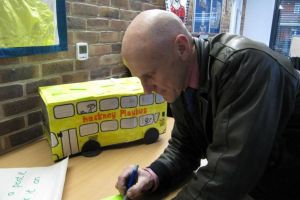 There was also a competition to name that bus?

There have been many disguises and 'pet' names for all the buses - sometimes based on the number plate, but occasionally from the theme of the livery - in this case 'Bugsie'.

Other names include 'Jungle', 'Ocean', 'Tilly' and 'Katy-Lou'. If I ever wrote a book about a bus rally I think Hackney could fill it themselves.

It certainly was lovely to go along and not only visit the bus itself but to also meet its enthusiastic users. 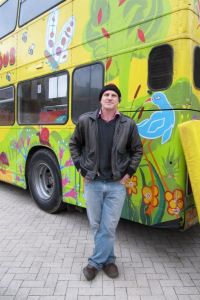 There certainly is something about a Playbus which captures your heart.

Our Bewbush Playbus hadn’t managed to get to 40, but we were also an early mobile project, we did at least now have a photographic history book about our Playbus journey. The book was published in 2012.

The history book led to many questions about what a Playbus was and what it could do, and this is where my bus story book adventures began.

It was my intention to visit other bus project and to write stories about them too. So perhaps now would be a good time. A story to maybe celebrate Hackney’s 50th birthday? And tenth bus? 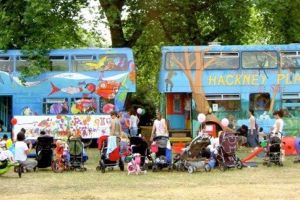 Recently I had heard from Hackney that they were now launching a campaign to get a new bus. What number will this be?

We are not quite sure? 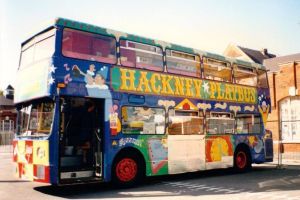 The bus I visited was, I think, number eight and since Hackney also bought the old Bristol Playbus maybe the next one might be number ten? 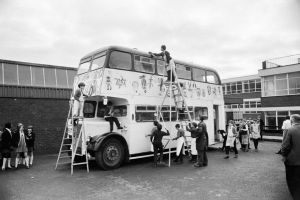 Following the publication of the Plowden Report in 1967, the first ever ‘Playmobile’ started in Liverpool in 1969, this was the start of the Playbus movement.

In 1970 the first London ‘Playmobile’ was set up in Ealing, many more followed and were closely linked: including Tower Hamlets; Hackney; Hammersmith and Fulham; Hounslow and Albion Kids show to name just a few.

There certainly were quite a few projects both voluntary as well as statutory, all serving different needs and community areas.

Our Bewbush Playbus was the first in the South-East of England started in 1980 this led to many more.

By the 1990’s there were so many different mobile projects located around the country and abroad. The magic of the Playbus wheels were turning. The play aspect for any aged user was important but there were certainly many more services a mobile could offer. The message was to take the service direct to where the needs were and in whatever way it was needed.

Hackney Playbus is a small charity dedicated to bringing play opportunities and support to families who need it the most. They run a variety of services for families ...

The Playbus is a double-decker bus that has been fully converted into an early-years play facility. The Playbus drives to housing estates and public parks in East London to create enabling play environments for children aged 0-4 years old. The play sessions provide a variety of resources and activities that support children’s early learning and development in all areas of the Early Years Foundation Stage. 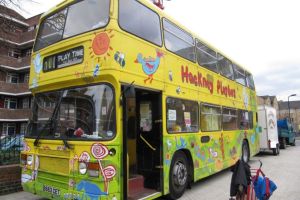 Hackney Playbus continues to work in innovative ways with a range of partners, including children’s centres, health professionals, social landlords and other voluntary sector agencies. It works wherever there is a risk that children in their early years might miss out on support, and wherever there is an identified need to reach out and engage with families.

During Playbus sessions, parents and carers can find out more about the family support services that are available in the local area. The team is able to signpost families to other services that may be of benefit to individual families, according to their needs. 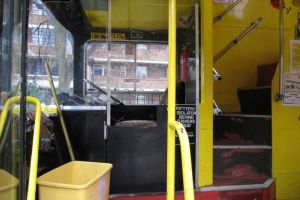 I wonder how many more buses they might get through?

What would be their story? 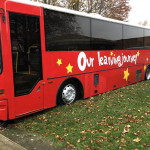 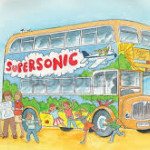 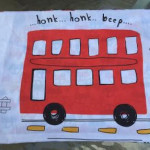